John Goree, recently retired Regional Manager for Ambient Support, received the British Empire Medal in recognition of 4 outstanding decades of service in social care in the New Year’s Honours for his services to the disabled in Lincolnshire and the Midlands following a 39-year career in social care.

John started his career as a nurse in the NHS before moving into social care where he joined Ambient 21 years ago.

From the very beginning John was a trail blazer for change- a fearless advocate for people with a disability and a pioneer in making sure service users’ voices were heard.  John’s passion was to ensure that a ‘person-centered’ approach was at the very heart of decision making and he introduced news ways of thinking and devised many schemes and projects that realised this type of care. Prior to his retirement, John’s most recent position was Regional Manager for the Lincolnshire and The Midlands, where he oversaw a team looking after 269 service users in the region. 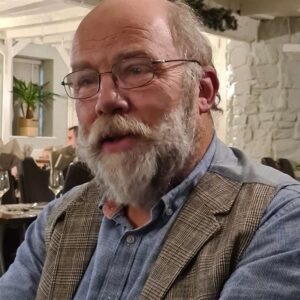 “When I first received the letter notifying me of the honour, I thought one of my friends was playing a joke. It wasn’t until two days later when I received a phone call from the Cabinet Office that I realised it was genuine. I feel very humbled that anyone thought what I was doing was worthy of such an honour.”

And of his time in social care:

“When I reflect upon my career, I was only able to accomplish this because of the teams around me. No one person can achieve such goals without support of like-minded people.

“Over the last 21 years Ambient Support has given me the foundation to follow my beliefs and values for which I am eternally grateful, as the impact on people’s lives has been significant. The staff in the Midlands and Lincolnshire shared these values and my philosophy which, resulted in them enjoying their work as well. I feel incredibly proud of what we have achieved together.

“This honour is reflective of the hard work and dedication of all our teams in implementing person-centred support and the ‘Ambient Way’. I feel lucky to have had the career I have, working with and supporting incredible people.”

Mark Milton, CEO of Ambient Support, congratulated John for his award. He says:

“John is incredibly modest about his contributions over the past 4 decades, which have helped transform the lives of thousands of people in the community. It is John’s willingness to believe that everyone can lead a valued and meaningful life, and his commitment and dedication to help make this happen, that makes all of us at Ambient Support incredibly proud and grateful to have worked alongside him and wholeheartedly delighted that he has received this prestigious recognition.”